It’s the Holiday Season and here in Berlin, that means a host of festive winter activities! During the dreary winter months, Germans are great at finding ways to get together and combat the cold.  From seasonal treats like Lebkuchen, Glühwein, and Schokolade (natürlich!); to live performances and winter sports, there’s something for everyone to enjoy! On this evening 7k tour, we will explore holiday traditions and the best ways to enjoy your winter in Berlin.

It’s the Holiday Season and here in Berlin, that means a host of festive winter activities! During the dreary winter months, Germans are great at finding ways to get together and combat the cold.  From seasonal treats like Lebkuchen, Glühwein, and Schokolade (natürlich!); to live performances and winter sports, there’s something for everyone to enjoy! On this evening 7k tour, we will explore holiday traditions and the best ways to enjoy your winter in Berlin.

Germany is famous for its holiday markets, New Year’s parties, and winter traditions. As we make our way around Berlin on this seasonal tour, we will go to Christmas markets in both Alexander Platz and Bebel Platz, where we will talk about not only the markets today, but also their history. As a tradition ongoing since Medieval times, Holiday markets are a long-standing feature of winter in Germany which some argue for the preservation of on UNESCO’s Intangible Cultural Heritage List, which includes things such as Turkish coffee culture and Jamaican Reggae music. Additionally, as we approach the Brandenburg gate, we will see not only one of Berlin’s most iconic landmarks, but also the site of one of the world’s largest New Year’s parties which reigns in thousands from around the world every year and hosts a range of celebrity acts. Next, no Holliday Season is complete without discussing the prominent Jewish Traditions within Berlin. At the Memorial for the Murdered Jews of Europe, we will pay homage to the thousands of Jews killed during World War II, as well discuss the Chanukkah festival held at the Jewish Museum Berlin in partnership with the Shtetl Berlin Yiddish Festival, which celebrates Jewish culture new and old. And finally, we will talk about Germany’s rich history with chocolate at Rausch Chocolate House, the biggest chocolate store in the country, before making our way towards the State Opera House where many seasonal acts play throughout the winter.

On this tour, you will be inspired with plenty of fun ideas of how to spend your time during the winter months in Berlin. You may even leave with some ideas of little gifts to bring home to your loved ones from your travels to Germany! 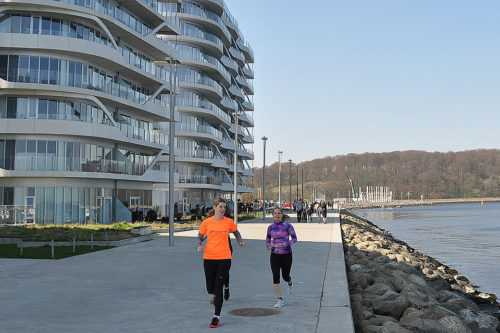 Hello! I’m Katarina, an artist and runner originally from the United States now living in Berlin. Though I am a relatively new resident here, I have gotten to know the city well through people, adventures, history, and—like you soon will—running the streets! My love of running began about a decade ago when my dad convinced me to run Cross Country and Track, which I continued through college, where I was mainly known for running 3k Steeplechase (if you don’t know the event, it’s the track race with hurdles and a water pit). Mostly, I train to improve my times in 3k-5k, though I love a 10k or Half-Marathon every now and again. As I mentioned, I’m an artist, so when I’m not running you can find me working on a new painting, shooting photos, or collaborating on a constant rotation of freelance gigs. Here, history is around every corner and new experiences on every avenue. Let’s go for a run and explore Berlin’s complex past and present!