Challenge yourself to cross all the bridges on the Grand Canal in just one run!

Test your muscles running up and down the Rialto bridge, sprinting through Saint Mark’s square and racing with the gondoliers to reach the Accademia, the Calatrava and the Scalzi bridges.

Hotel pickup or Standard Meeting Point The meeting location will be on St. Mark's Square. If your lodging is not on the main island of Venice (Please take a look the GPS link)

The Grand canal is the longest and deepest canal in Venice. Four monumental bridges go across it, and you are about to run on all of them!

We’ll start our tour in Saint Mark Square, running by the golden Basilica and the ancient Doge’s Palace. We’ll look for the golden angel on top of the Campanile and for your sign of the zodiac on the Clock Tower. Are your legs warmed-up now? Off we go! We’ll sprint through the two gigantic columns that make the gate of the city and we’ll run towards the most famous bridge ever: the Bridge of Sighs. Be warned though: this bridge is not as romantic as its name might suggest!

The tour will proceed along Riva degli Schiavoni to the Arsenale of Venice, the majestic shipyard of the Republic of Venice. You’ll see the two huge lions guarding it’s gate and the massive wall protecting the secrets of the Venetian fleet.

Our run will continue on to Cannaregio district, the most authentic part of Venice. We’ll be running through the winding calles and up and down little bridges between the houses of the Venetians.

We’ll jog in the campos of the Ghetto, through the synagogues of the Jewish district and the kosher restaurants and bakeries.

We’ll reach the northern extremity of the city at Baia del Re from which you get to see the 4 kilometre long bridge that connects Venice to the mainland. When the weather is fine you even get to see the Alps mountains from there!

Our run continues to our first bridge on the Grand Canal: the Scalzi Bridge. It’s named after the monks of a nearby church: scalzi means barefoot and that’s how these monks used to walk around, as a penitence.

It’s a massive stone bridge, ready to run to the other side?

You’ll have a couple of minutes to catch your breath before we reach our second bridge on the Grand Canal: the Bridge of the Constitution. It’s the only modern bridge on the Grand Canal, it was built only a couple of years ago to connect the train station to the bus station. It was designed by the starchitect Calatrava and it is absolutely spectacular; the bases are made of white Istrian stone, the railings are metal and the steps are made of glass! Aren’t you looking forward to running on its glass steps? Careful though, they might be slippery…

The tour continues to Strada Nuova: nuova means new and, as the name suggests, is a modern street that will allow us to speed it up a little bit to go and reach the most important bridge of Venice: the Rialto Bridge. It was quite a challenge to build something this massive more than four hundred years ago but it’s still perfect. From its top you can enjoy the best possible view on the Grand Canal: you’ll see the palazzi of the Venetian noble families, the gondolas sliding on the calm water and the seagulls gliding above you.

This bridge leads to the Rialto Market. We’ll go through the stalls where the Venetian buy their groceries. Colours and scents change continuously: artichokes, basil and fragrant peaches in the summer; pumpkin, radicchio and mushrooms in the fall… And then there’s the fish market: look at the seabass, the tuna, the crabs and the swordfish. They are all as fresh as they come.

The area surrounding the market still brings the names of the merchandise that used to be sold here : erbaria (herbs), naranzaria (oranges), and the precious spezie, the spices that the Venetian merchants brought back from the East.

All right, the time has come to do it: let’s go and cross our fourth and last bridge on the Grand Canal: the Accademia Bridge. It’s maybe the most beautiful bridge in Venice: it’s in wood, it was meant to be only temporary, but it’s such a beauty that the citizens decided to keep it as it was!

Prepare to have your mind blown by the view: the Peggy Guggenheim Collection, the Salute Church and the Punta della Dogana lay above you.

Congratulations: you have crossed all the bridges of the Grand Canal in just one run!

One review with a 5-star rating 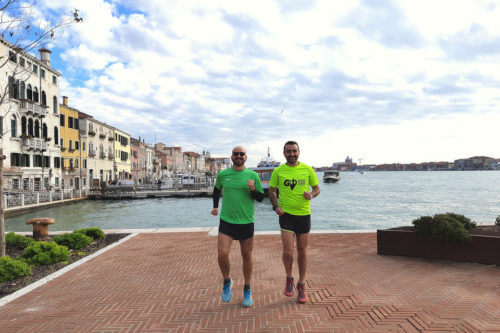 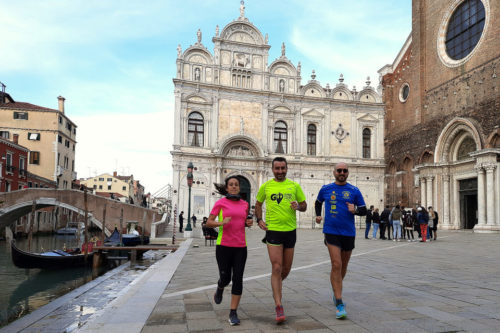 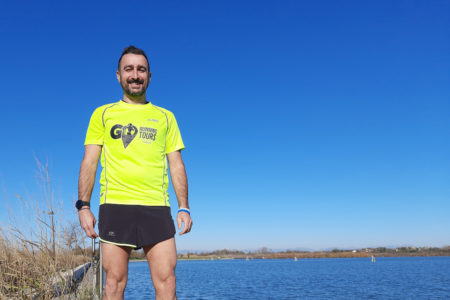 They say you have to follow your passions to be happy: here I am! I love cooking and running, so my plan is to run with you before going to work: I am a chef. My name is Alessandro and I have been living, working and running in Venice for more than 20 years and I’d like to share my passion for this unique city with you.