The tour starts and ends at Plaza de España. After crossing the Manzanares Rivervia Puente de Segovia bridge, we’ll run through Casa de Campo which was previously the hunting ground of the Spanish Royal Family. An experience in the heart of Madrid which will make you feel like being in the countryside.

Casa de Campo is actually one of the biggest parks in the world. In fact it’s five times the size of New York City’s famous Central Park. The park is situated to the west side of the historical area of Madrid and hosts a multitude of activities including the Madrid Zoo and Aquarium, an amusement park (Parque de Atracciones) and a cable car ride called the Teleferico de Madrid which boasts some awesome aerial views of the park. Our run will start at “Km Zero” in Puerta del Sol which is the spot where all the major roads in Spain are measured from.  We’ll proceed up Calle (Street) Mayor, and turn right into Calle Bailen with the Almudena Cathedral and the Royal Palace on display to our left.

After crossing over the Manzanares River we’ll arrive at one of the main entrances of the park. From here we’ll wind our way along some of the roads and tracks in the park which was once the hunting reserve of the Spanish monarchs. The park has many trails that criss cross one another and are great for running in many different directions if desired.

Many of the less frequented areas of the park showcase Madrid’s natural semi-arid beauty with red soil and scruffy looking pine trees. The pathways are fairly undulating so don’t expect a flat, easy run through the park (certainly no walk in the park but it’s fairly do-able for those with a certain level of fitness). The park is also home to many wild rabbits and has an abundance of bird life including starlings, orioles and nightingales. If you’ve done all the city sight seeing and are craving some outdoors, this might be one of the routes you’d enjoy away from the busy city life! We’ll end off the run with a loop around the lake in the park, and back to where we started in Puerta del Sol. 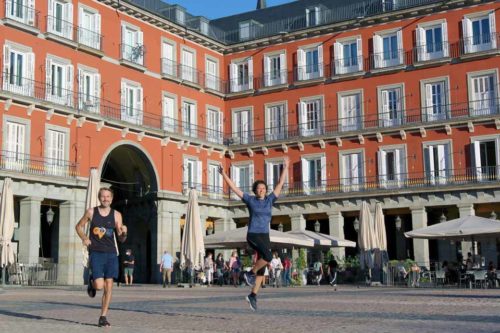