A“must-see” tour of the most emblematic streets of Guatemala City that begins in a large square known to many citizens of the capital named as El Obelisco; the tour continues along these pretty boulevard La Reforma, passes through the Centro Cívicoand ends in the historic center of the capital city of Guatemala.

This Obelisco tour will start at the Reforma avenue with a beautiful bike path, surrounded by green gardens, trees, and flowers. It passes through the middle of a large boulevard with many monuments. These are dedicated to relevant figures in the history of Guatemala. On this Guatemala city tour, we come across some historical buildings. Some other places on this route are very modern where government, banking, commercial or cultural institutions operate. In this part of the route, many people walk to their work or run on this path for exercise,  and also, you will also see many cyclists or people on skateboards.

We will continue with the visit of The Centro Cívico. It is a complex of important government buildings in the country, created in the 50s and 60s. The headquarters of institutions such as social security, the municipality, the Ministry of Finance, the Palace of Justice, the Central Bank, are among others.

On this Guatemala Obelisco Reforma city-tour, what makes this area very striking, are its murals that decorate these buildings, created by a famous Guatemalan artist. At the end of the Reforma avenue, following the route of the track, we will find the church of Yurrita. This sector is known as Cuatro Grados (Four Degrees) and we will pass near the Olympic stadium.

The third part of the tour is the Historic Center of the city. Through the 6th avenue of zone 1, also known as Paseo de la Sexta. It is a pedestrian street of approximately 2km from the Municipality to the National Palace.

In Guatemala city go-run tour, you can see part of the many old buildings and Catholic churches in the central area, some have had to be rebuilt after the earthquakes of 1917. This boulevard not only has many clothing stores, shoes, toys, restaurants, galleries, theaters, apartment or office buildings, but also, street performers, among many other curiosities.

At the end of this guided run, you find the very popular Central Park that is surrounded by the National Palace of Culture (the giant avocado), the Metropolitan Cathedral, and the Commerce Portal. Running in the Paseo de la Sexta is a lot of fun. Many people who walk around the city center converge here. The people who run an errand, many runners of all kinds, local artists, and informal vendors.

This route is generally flat, but it can also have some parts with a slight inclination that are almost imperceptible. 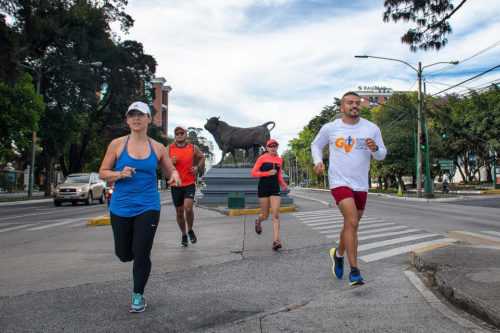 I love running since 10 years ago, both short and long distances; Guatemala has very interesting (and challenging) places to run, I think that new routes are discovered every day throughout the country and its main destinations such as the capital and Antigua. For me, running is not just my passion, but my lifestyle and my usual state. I have managed to connect my legs with my brain and heart, I have discovered that running is when I feel happier; But what really motivates me and makes me happy is to make other people feel that same passion for running, that they feel that same freedom, that they enjoy each one of those kilometers and enjoy that good energy Mother Nature transmits when running in such a great country like Guatemala.   I remember when I started, my pace was around 6:30 ~ 7:00 and I never did more than 10K a week but after putting more effort I have been pacer of pace of 4:55 in a half marathon, I like to get involved in Many activities related to running in Guatemala, together with other friends, we lead a local team of runners, I have run hundreds of times 10k, 15k, 21k, 30k and a marathon in Colombia, on asphalt, in the mountains or in cobblestones such as Antigua Guatemala, with which I verify that with discipline great things are achieved. Come and give me the honor of guiding you through Guatemala, I assure you that you will like it; You will enjoy a fabulous climate and spectacular natural landscapes.