“Full Monty Tour” is not just a play on words, it’s the real way to discover Paris from every angle as runners venture through 10 of its 20 arrondissements! We see uncountable astounding sights including the Eiffel Tower, the Louvre and Notre Dame.

Welcome to the “Full Monty Tour” where you will clock 21 kilometers while experiencing the urban vibe as well as the incredible monuments and sights of Paris. Runners will especially admire the Opéra Garnier, the Sacré Coeur, the Moulin Rouge, the Eiffel Tower, Notre Dame, the Louvre and the Arc de Triomphe.

Our meeting point is the metro station Opéra as there is not a better way to discover the Palais Garnier opera house. Upon exiting the metro, you can’t miss this neo-Baroque wonder from the 19th century. The building personifies the opulence of the Second Empire with its cornucopia of columns, friezes, gilded figures and busts, which decorate the ornate façade. The perfect place to start your Half Marathon in Paris.

When gradually climbing toward Montmartre mount, you will definitely be delighted by viewing the gleaming white Sacré Coeur as a kind of urban lighthouse focal point. It runs a close second to the Eiffel Tower in the popularity stakes. Impressive rather than beautiful, the vast Romano-Byzantine basilica was designed by Paul Abadie as a symbol of contrition after France’s defeat in the Franco-Prussian war. Its construction took decades from 1875 to 1919. From the place du Parvis, right down the Sacré Coeur, Paris unfolds before us with a wonderful panoramic view of the Parisian roofs.

And how not to be stunned by the Arc de Triomphe right in the middle of the place Charles-de-Gaulle! The massive triumphal arch was ordered by Napoleon following the victory at the battle of Austerlitz in 1805 to honor those who fought for France in the Napoleonic wars. You’ll quickly see what urban planner Baron Haussmann did to the city in the mid-1800s: twelve broad straight boulevards radiate in all directions from the place Charles-de-Gaulle thus named Étoile which means star. One of them is of course the wide pavements’ famous avenue des Champs-Elysées. Designed by André Le Nôtre, its sweeping uphill movement makes it ideal for processions among which the annual Bastille day on the 14th of July.

This Half Marathon running tour is the real way to discover Paris from every angle as runners venture through 10 of the 20 arrondissements of the French Capital! It’s diverse, it’s historical, it’s breathtaking, it’s edgy and it’s “Paris” to its fingertips.

One tour for all tastes! This half marathon suits both intermediate and expert runners. We usually stop to take in many sights but we definitely also can run it in one go upon request. 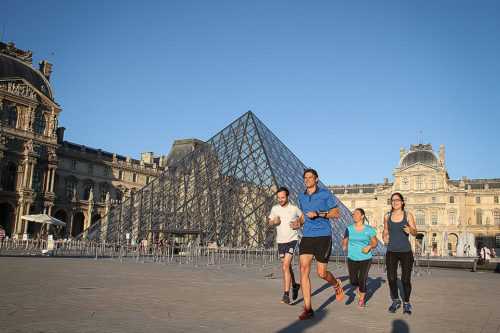 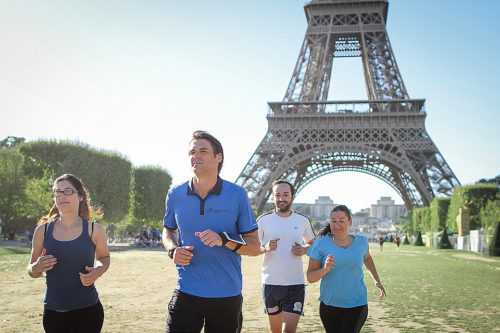