Running in Rome is extremely rewarding, can be tough and is surely never dull! For Romans, being a runner is almost like joining a secret club. Now we are not talking about the Sunday-in-the-park runners, but rather those who hit the pavement, or cobblestones, a few times a week in search of the next to forgotten corner or buggavilla soaked alley, while in training for their next race. Don’t get me wrong, Sunday runs in one of Rome’s many green and clean parks, with endless options of 5 km loops, is a beautiful way to get your run in, in peace and tranquility but with all the history, culture and excitement of a more than 2000 year old city at your doorstep – why not hit the streets?

There are surely a couple of ”must-knows” before running out into the Roman afternoon, which will help you enjoy your run and keep you safe! Traffic in Rome is rampant and subsequently, the air quality suffers, particularly in the summer months. The city is working to curb the CO2 levels with ”Green Days”, permitting cars with only the lowest emission rates into the city, which helps with both traffic and the air. Beating the traffic or going for a night run will ensure you are not breathing the fumes. Getting out before 7 am or after 7 pm is typically the best. Streets in the center area are lit from dusk to dawn and a little reflective gear or light will make sure motorists see you.

There exists a symbiotic relationship between the car and runner in Rome. Because of the occasional unreliability of sidewalks, due to parked cars, tree roots or other obstructions, runners make use of the road. This can be difficult for first-time Rome runners but once acclimated, you become comfortable with both running alongside and against cars and even crossing the road. In return for sharing the space, runners remind the automated world of driving etiquette – crosswalks, stop signs and stop lights!

When all is said and done, seeing Rome on foot is the best and only way to experience the city. The sights, smells, and sounds of this living urban epicenter are caught in all their enigmatic brilliance. You can run past the Colosseum, through a political demonstration under the Pope’s window, over a centuries-old bridge and grab a coffee with a new-found running friend all before sunrise.

Running tours in Rome are by far the best way to get your workout in while getting the inside scoop from local Roman runners. The private guides can tailor your tour for your pace, distance, and interests – while providing a historical story of the city and its piazzas, churches, monuments, and bridges. In an almost 2800-year-old city, there is history behind every corner and your guide balances that with anecdotes about life in contemporary Rome – along with suggestions for great shopping, dining and drinking spots.

Your running guide can meet you at your hotel and is eager to share their city with you while navigating the best streets to run and getting you to any of Rome’s 2000 water fountains.

If you are looking to get all the major sites in, in one 8km run then this is the run for you! This run takes you through the UNESCO World Heritage historic centre of Rome and past most of the not-to-miss sites.

Looking to extend your running tour and soak in a little more of what Rome has to offer? Then the Sunrise run is for you! This 15km tour gives you all of the Bucket List Tour plus Trastevere and a beautiful bird’s eye view from the Giannicolo Hill – added bonus for the early morning run to catch the sunrise coming up over the city! In our first months, our 15km route has reigned supreme, with most bookings opting for this great run. This morning run gives you the unique experience of seeing part of Rome

Looking to escape the traffic and get a unique perspective on the city? Hit up this 9 km tour, which winds its way along the Tiber River, the blessing and curse of Roman history. This peaceful run has no cars and is completely flat, outside of a few flights of stairs!

Rome is home to a number of internationally known races, in addition to almost weekly local races in the Rome area. Both offer unique opportunities to see Rome, its surrounding neighborhoods and to run with local runners.

Among the more famous of Rome races are: Rome Ostia Half Marathon in early March, the Rome Marathon held in early April and the Rome Appia Run 13km.

There are a few steadfast routes you can run on your own while in Rome and they vary from street to super green villa (park) runs. A 5 km run through Villa Borghese will take you through Rome’s most central and arguably most beautiful parks of Rome. It is home not only to a lake, Rome’s International Horse Show and the stunning Casina Valadier but also Rome’s Biopark and spectacular views from the Pincio Hill.

Just to the east side of the center of Rome lies Parco degli Acquedotti, not so originally named for the three main Roman built water arteries that pass through its rolling hills. On a 10 km loop through this amazing park you will find yourself running alongside, over and under centuries-old Roman aqueducts, two still bringing water to the city today! This park is just a stones toss from Cinecittà, Rome’s Hollywood and is easily accessible by metro or bus.

Rome has a serious running club culture and it is only growing! Among a few of the more popular and historical clubs of Rome, with a combined membership of over 1000 runners are G.S. Bancari Romani and G.S. Cat Sport. Both clubs play a large part in organizing and facilitating official races throughout Rome.

The Roma Road Runners Club is a great one for the international crowd, as they have relationships with the American University of Rome and other ex-pat groups.

Membership in clubs requires a full athletic medical checkup, which permits them to register you with FIDAL, the national running federation. All clubs have a range of runners, from beginner to elite and organize regular group training runs or provide individual support for goal setting and getting there.

If you are looking for a good place to purchase running gear in Rome, there are a variety of choices. The center of Rome is home to a shop of every big brand like Nike and New Balance, and the chain shops like Foot Locker, Cisalfa and Decathlon but there are some great smaller shops with a variety of choices and happy-to-help-you people!

Go Running, just south of the city, is a larger retail running shop with a great deal of variety and options. If you cannot find it there, then you might not find it in Rome.

Cat Sport, one of the clubs listed above, is located on the east side of the city. This shop, just like the club, is family owned and operated. They have the equipment, love of running and time to figure out exactly what shoes you need and give you personalized suggestions based on your feet, gait, and style.

Calcaterra Sport, started by famous Italian ultra-marathoner Giorgio Calcaterra, is a great shop just outside the Vatican walls in the center. This is a fully stocked shop, which frequently offers workshops for the beginner and/or advanced runner.

Rome is a full-on four seasons type city with the added pleasure of micro-climates. You can have rain on one side of a piazza and dry sunny weather on the other.

The major upside is that it is never too cold or too hot to hit the pavement, as long as you get out early enough! In the hot and humid summer season, June – August being the toughest, it is best to get out early in the morning between 05:00 – 09:00. The colder winter months, December – March, just bundle up a little more and be ready for some rain.

I tend to layer when running in the city, as temperatures and wind can vary from time and place. My most outer shell is almost always either a windbreaker or waterproof K-way.

Your biggest adversary to a great run will be a chance of rain throughout the Spring, Fall, and Winter. If you come prepared, the streets will be yours! 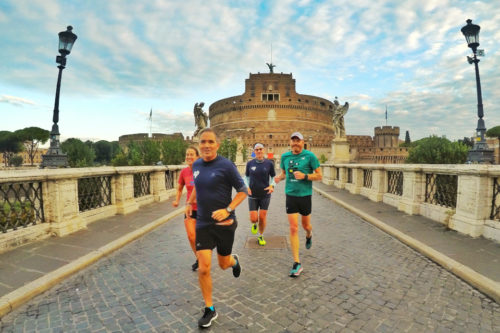 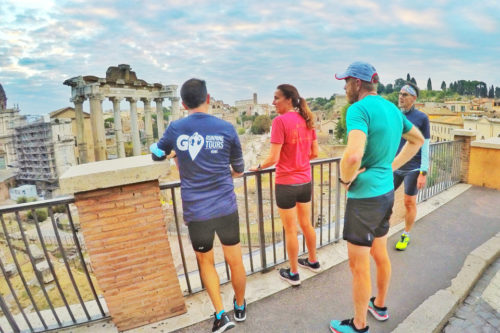 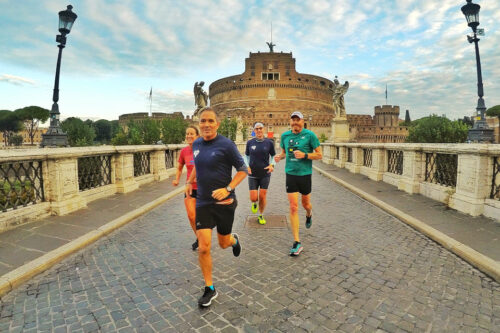 FIND ALL RUNNING TOURS IN ROME

CHECK OUT SOME OTHER ROME INSIGHTS Running in Rome is extremely rewarding, can be tough and is surely never dull! For Romans, being a runner is almost like joining a secret club. Now we are not talking about the Sunday-in-the-park runners, but rather those who hit the pavement, or cobblestones, a few times a week in search of the next to …

Sightseeing in Rome Sightseeing in Rome also known as The Eternal City is second to none. Rome is jam packed with history and it dates back 2700 years making it one of the most ancient cities in the world. ROME AND RUNNING The monumental buildings such as the Colosseum, Trevi Fountain, St. Peters Basilica and …